Lost In the Woods 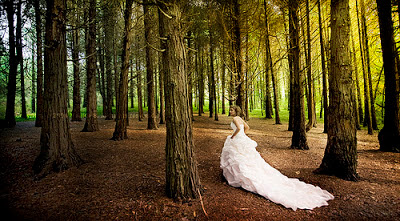 As a child, getting lost in the woods is probably the makings of a worst nightmare. Where is mother? Where is the path? Nothing is recognizable. Why is it so dark? The trees loom so menacingly. The silence is terrifying, but it gets even scarier when there are sudden, unfamiliar forest noises that come from sources that become more and more menacing the longer one imagines what they might be.

As adults we feel something like that when we lose our way. Something happens in life (a diagnosis of cancer, the death of a loved one, the loss of a job, a major financial loss, a life-threatening illness of a child, the loss of a partner to divorce or abandonment, the outbreak of war, a kidnapping, maybe you lost your home to fire, a hurricane, tornado, or earthquake, maybe you are the victim of identity theft, perhaps you just realized that everything you believed about yourself is not true, etc), and suddenly we feel not only that we are in unfamiliar territory, but that we can not, no matter how hard we try, see a clearly delineated pathway. Darkness abounds, and we truly feel not only that we are in a dark night of the soul, but that none of the familiar landmarks that have served us in the past, are available to us now.

Some individuals, under such circumstances, succumb to victim thinking or to depression, become ill themselves, or in some other way allow this to undo them.

Many others, however, choose another path.

Choosing another path literally means that: finding a new path in the darkness, finding a new path to take you through the woods, even if you don't definitively know that it will actually bring you to the edge of the forest and into the light. All you do know, however, is that if you stay put, if you remain stuck in the place in which you are, nothing will change, and you are not doing anything about your predicament.

It is literally a question of using the darkness and the sensation of being lost to find a new path.

Being willing to think out of the box requires being pro-active, self-motivated, and above all, aware of what it was - at least in part - that caused the current circumstances. If they were force majeure and totally out of your hands, such as in the case of a hurricane, it may mean looking at what was lost dispassionately and with detachment, rather than from the point of view of the loss. The position you choose to take regarding your loss or problem, will in many ways determine the kind of eventual outcome you will have, and the speed with which it will come.

Being willing to think out of the box also requires being willing to leave your comfort zone. Yes, I know you have already been thrown out of your comfort zone by the calamity, but you may still choose to remain in it as you go about picking up the pieces of your life in order to put your life back together again as closely as possible to the way it was before. That may not be the best alternative. It's as they say: if you have lemons, make lemonade. So in this sense, leaving your comfort zone may mean to re-think your life on totally different and unknown terms. You may be surprised how much better it winds up feeling to you, even though at first it is all very strange. But growth, change, progress, and transformation tends to come about as we venture out into unknown arenas, and above all, defy our fear of risk and failure. (See also my August 2007 Newsletter: Making Fear of the Unknown Work For You).

Being willing to think out of the box also means being prepared to start making use of your intuition, if you have not already done so. (See also my May 2006 Newsletter: Introducing Our Second and Third Brains: We Do Think With Our Heart and Instinct). Your intuition can literally be one of the most potent tools you can use in order to get back on track. Scientists have conclusively proven (see the article cited in this paragraph) that we have billions of neural cells in our heart and gut, the former dealing with a type of emotional intelligence, and the latter with an intuitive intelligence. Both of these "brains" supply the rational brain (the one in our head) with information - frequently the second and third brains process the information before the rational brain does. Is this not proof enough for you to begin to make use of that fount of information you have been neglecting: your intuition? Is it not proof enough for you to want to begin to develop this as much as the intelligence you have originating in your brain?