What Do You Do When You Hit a Patch of Ice? 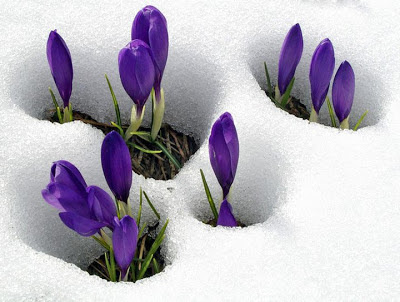 Normally when we hit a patch of ice while driving, we correct, adjust, and after bringing the car back under our control, we cautiously continue on our way, driving, perhaps, somewhat more slowly than before, but nevertheless driving with confidence, secure in our ability to handle the newly difficult driving hazard.


Life is no different.

But how you react to those patches of ice in life not only says a lot about you, but also helps determine whether you will - or will not - reach your eventual goal.

So let's look at some possible reactions to those patches of ice:


What are all of these? Excuses. And also a way of giving yourself permission to give up. Yes. Give up.
(see also my August 2007 Newsletter: Making Fear of the Unknown Work For You). And I have always insisted that most of those who hit the big times, who succeeded, first hit plenty of ice patches, failed, and looked as though they might never make it. As examples I've given Lincoln, Edison, Mandela, to name only a few. When they were at the bottom of their deepest pits, or on their greatest and most overwhelming or frightening or apparently insurmountable ice patch, they essentially told themselves to carry on. They reminded themselves how much they believed in their quest. They straightened their shoulders, lifted their chin and took the next step, even when they didn't know whether that next step would get them to the other side of the ice patch, or would merely land them in more deep water.

This is called persistence. This is called having a mission. This is called having a meaning in your life (see also my June 2006 Newsletter: Finding A Meaning For Your Life). And as we sit back and think about those attitudes and mid-sets, let's not forget that just about every single success story you have ever heard of follows a series of set-backs, rejections, failures, and other difficulties. When we hear about the successful person, he has just jumped out of nowhere and become a household word, so we tend to assume they were an overnight success story. Not so.

They had to work for it. They had to put into practice that business about believing in their quest, their purpose, their mission, their meaning. And they had to believe in themselves. Sometimes, as in the case of Lincoln and Edison, they just ran into failure after failure (the former simply could not get elected to the different posts he wanted, at least not the first time, and the latter kept inventing light bulbs that did not work), and other times, as in the case of Nelson Mandela and his vision of an apartheid-free South Africa, his plans got put on the back burner while he spent decades in jail.

Ok, you say, but what about people who just live regular lives? I'll tell you a story about a woman who lived a regular life. A bunch of kids, no money, divorced, out of work, but she kept doing what she believed in, and wrote stuff on café tables. Nobody wanted it either, when she shopped it around, she just kept running into brick walls: personal, emotional, financial, and then literary. Until finally one publisher did believe in her story. And the rest of the Harry Potter saga is history.

Can you believe in yourself? And in what you are doing? This will help get you across the patch of ice. I promise.